The weekend is here

“Be yourself; everyone else is already taken.” ― Oscar Wilde

This week flew by (as usual). This morning it was CSA pickup day. We got brussels sprouts! Also, the usual greens, tomatoes, eggplant, beets, corn, zucchini, jalapeno's, and summer squash. Each week I typically make a stir fry out of a little of everything we get but not today. Today hubby is preparing my Birthday dinner! I had my choice of going anywhere I wanted for dinner but once he put his homemade lasagna on the list of options there was no going back. He makes a magnificent lasagna and I am going to enjoy it!

I've been feeling a little under the weather this week, mostly tired. Probably a virus going around or else it's the neverending allergies.

Today would normally be the RC Fun Fly here but it's rainy so I doubt they'll do much flying. Hopefully it will break tomorrow and we'll get to see some planes. I'll post pics if it works out. Ang and fam are planning on coming out tomorrow as well so I'm getting all the veggies done up today so I can just enjoy the day tomorrow.

Our card partners brought Birthday cake (Ice Cream cake) last night. That was a treat and to top it off - WE WON! We skunked them again 😁
Posted by Deb at 12:00 PM 2 comments:

This past weekend was girls weekend getaway with Crystal. Back in June I had an overnighter with Angie. This weekend we went to Fergus Falls and Alexandria. She had to drive much farther (from Mitchell, SD) but we had a great time exploring and eating great food.

The hotel in Fergus Falls recommended taking in the RTC (Regional Treatment Center). It was closed in 2005 and they don't offer tours anymore but we could go around the outside. We took a lot of pictures and it was really awesome to see. It was used as an asylum from 1890 until 2005. Some say it's haunted. We just appreciated the architecture and the craftsmanship. It is 500,000 sq. ft and the grounds are 11 acres. We had QUITE a walk! We also took the Riverwalk tour - reminded me of home 😄 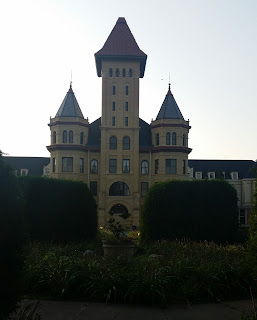 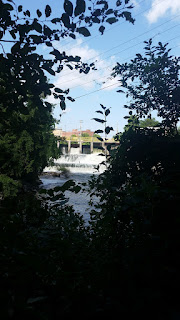 On our way to Alexandria we had a stop at Battle Lake, MN. Very cute town with a great fishing pier for the community. It was a nice day so there was quite a bit of activity on the lake. We strolled uptown and got a latte and visited the Art Gallery. There were all forms of art and it was very interesting. I found a yarn bowl that I couldn't live without. I'll have to take a picture and add it. I just love pottery but I was able to restrain myself pretty well 😇

Between Battle Lake and Alexandria was a beautiful drive but we drove through a torrential downpour! 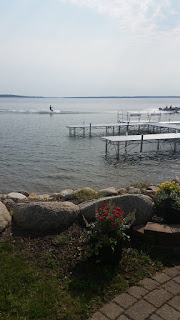 Next up, Alexandria! We, of course, took in the Runestone Museum. There were all kinds of things from that era in multiple buildings. It is a must see for anyone that hasn't been. 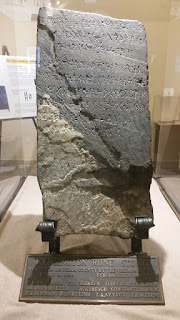 What a great weekend! 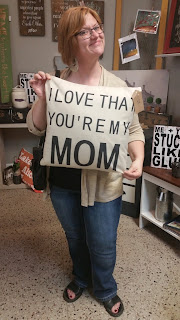 P.S. We postponed the game until I returned - WE WON!!

I can't believe it's Saturday again, already! And it's almost over. Time flies!

This past week the guy that hays our fields was busy getting his hay baled up before the rain, he made it and it rained right afterwards. It's always great to see it cut because we can see the wildlife much better. The crows were all over it too, we suspect they were grasshopper hunting. I hope they eat every last grasshopper! 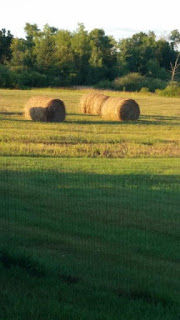 The little boys were out this week because Milo found a slingshot and he wanted Grampa to shoot with him (He has one too). He took them out to see if they could see any striped gophers. This was before the guy baled up the hay. But, they didn't see any. The had fun shooting cans with their "wrist rockets" though. Even Rowan got to give it a try. He hit the can first try! 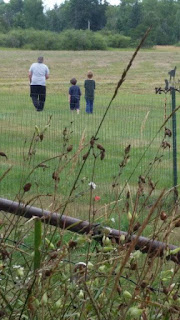 Cooper has been under the weather so on Friday it was a trip to the Vet. He had giardia cysts that he had gotten from who knows where. It's not a good thing though so it's 3 kinds of medication for the week and a retest after a week to be sure it's all gone. We suspect it was from him drinking out of the rain barrel no matter how many times we got after him. The Vet agreed that was probably the culprit since he hasn't been in any ponds or rivers. I hope he get's better soon.

The CSA box today included corn, beets, jalapeno and green peppers, tomatoes, eggplant, cucumbers, zucchini, lettuces, and flat beans. Tomorrow we'll have the sweet corn while we celebrate little Franks birthday. He's 13 now. I asked him if he felt different being a teenager but he said no. 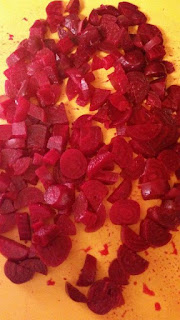 Beets all cooked and diced and ready for the freezer. I also made some Eggplant Parmesan for the first time. We really liked it. The recipe I used was super simple and I only made a couple of changes. I used some italian panko instead of regular and I used more cheese. I also added fresh basil. 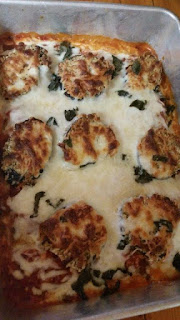 It was a pretty busy day but we made time to watch a few episodes of Alone.

Today was CSA farm share pickup day at the farmers market. We've been getting them for a couple months now and it's always fun to see what's new in the box. 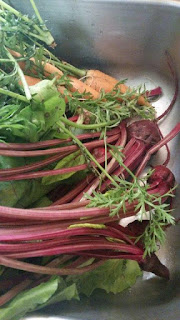 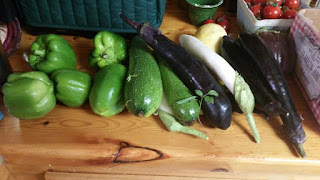 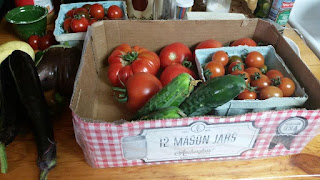 Usually for lunch on CSA Saturday we have a stirfry of all the fresh veggies. 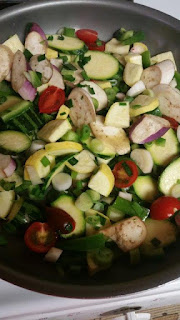 Afterwards its clean it all up and get most of it in the freezer so it doesn't go to waste. The wild bunnies around here get most of the tops. I never see them get them but they disappear so some little creatures are making good use of them!

Rainy here today so after veggie cleanup we spent a few hours binge watching Swamp People. We were supposed to go to a memorial service for a friend of hours that passed away this past winter but Frank just wasn't up to it today.