Our family just grew by 1


Elke is back at the Sprucehaven. Unfortunately it's because our good friend, Dale, passed away. He had just overcome the major medical issues he was having earlier in the year that brought Elke to stay with us. He unexpectedly died in a car accident. His son had taken Elke in initially but he knew his Dad wanted her to come back here if anything happened to him and....here she will be. She's a joy to have, Cooper is completely in love with her - as are we.

And Cooper gave her an official welcome. 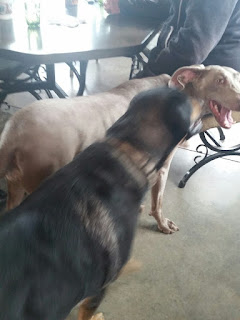 The 22nd was Rowan's 5th Birthday and we'll celebrate with him on Saturday. He is just growing like a weed! 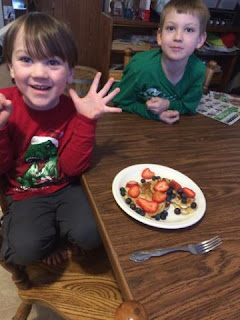 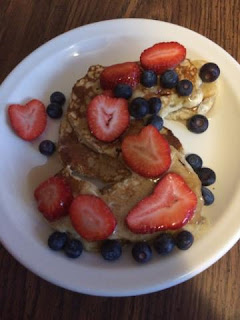 He had the number pancake as they always do. It's an awesome tradition Angie started with the boys. I wonder if she'll continue when they hit double digits :)

P.S. We won! We switched it up (again) and Frank and I were partners. It was not well received but worked for us.

This time of the year is just nuts busy. We made it through Christmas and it was wonderful. We missed Dale and Crystal but we enjoyed having Ang, Mike, the kiddo's, and Mike's family here to celebrate with us. 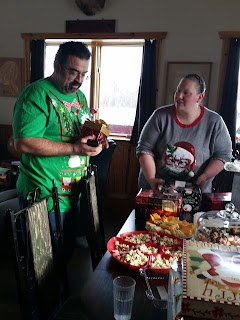 We did an "ugly sweater" theme this year - that was fun. We had too much food (as per usual) and ate leftovers for the week. 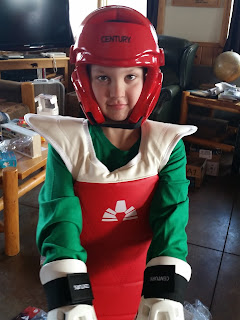 Milo was setup with his own sparring gear. He humored me with a pose - I can still get away with that :)

New Years was spent quietly. We all decided that between Thanksgiving and Christmas we were all ready to just stay home and relax. Hubby and I had dinner and a movie - The Dark Tower, it was an interesting movie and we liked it fine.

Mostly we have tried to stay WARM! Good grief, it has been over 20 degrees below the donut most nights since Christmas. We've discovered some air leaks downstairs so our desk area is cold. We will tackle getting some insulating done this weekend. For the time being I covered some stuff that was leaking cold air with whatever I could find.

Cooper is having knee troubles still, I purchased a knee brace for him but it's like trying to put a bra on a pig. After an hour or so that was ENOUGH of that. We will try another day. I give him larger doses of joint supplements. He would probably not have this issue if he didn't think he was part kangaroo.

P.S. They have won the last couple weeks - boo hiss