The candy is all bagged up and ready for our little goblins. We don't get trick or treaters out here in the boonies but the Grandkids need to have their sweeties. And their Mom and Dad get some too :) 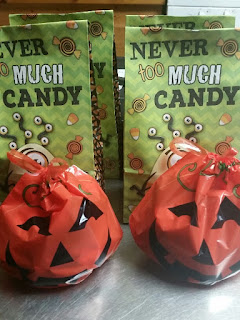 We have eye doctor appointments this afternoon. I am SO ready to get some glasses that just do the job. I have been wearing reading glasses on and off for 15 years now and it's getting to where it's mostly on but I know it's hurting my eyes too. A couple three years ago I did get some but they were trifocals and the only thing they are good for is distance vision. I hope this time it's a better fix.

Hope today the weather is nicer for the kids so they don't have to cover up their costumes with winter gear! It's not as windy so far so that would even help.

The news has been talking all week about the Winter storm we were to have starting Thursday through 7 am today. Well, we got a bit of snow and a lot of wind and cold but, luckily, it was not as bad as expected. We hunkered down and rode it out. The wind is still blowing and it's still cold but we've retained power through it (so far) and kept warm and well fed.

The past couple of days everyone (myself included) ran around picking up necessities, gassing up the car, getting out the shovels, etc., so that we were all set. Minnesotan's have the drill down!

This is what things looked like on the Sprucehaven this morning. 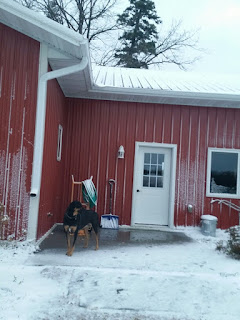 Even Coop is under impressed with it all. He isn't a fan of wind OR cold.

Yesterday I took Milo his new red scarf I knitted for him, he seemed to like it. It was around his neck, around his waist, tied to a stick as a flag, and tried on the kitty. It seemed to pass all the tests.

Tonight is Card Night so last night I tried a new cookie recipe for us - I pretty much used the recipe as a guide only. It called for milk, which I haven't seen in a recipe before and I used orange juice instead since it was for cranberry cookies (it called for craisins, which I did use). They turned out pretty good and it's nice to try something new.
Posted by Deb at 6:05 PM No comments: 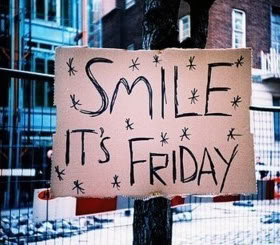 This past week I've had some kind of allergy thing going on and every day it seems to be worse. Today was pretty miserable, I think it has to do with all the wind we're having blowing around who knows what. My ears have this buzzing sound that drives me batty.

I got home from work early today and then got a call from Ang - Mike was in the E.R. again. It's not like it hasn't happened before but it's usually something in his eye, a bad cut at work, etc. but she said he thinks he's having a heart attack and wondered if I was still in town to come sit with the boys so she could run up there. I drove in immediately and got her on her way. The boys and I chatted for awhile about Halloween costumes and Milo read part of a story. We even dressed up Grandpuppy Hugo, we didn't mention that to Ang, and he was a good sport. Then we went outside. Other than the ridiculous wind it was a beautiful day, 72 degrees above the donut! At the end of October that's a big deal.

Luckily, Mike was alright. His blood pressure was pretty high but they thought he may have pulled a chest muscle at work. He had been lifting heavy barrels. He will need to make an appointment to be checked out by his regular doc to see if he should be on meds for that.

I found an interesting knit stitch on Pinterest and decided to try it on a scarf. I like it and it's EASY, just an 8 row repeat. Red is Milo's favorite color so I guess it will be for him, I'll dig out some green yarn later and make one for Rowan. 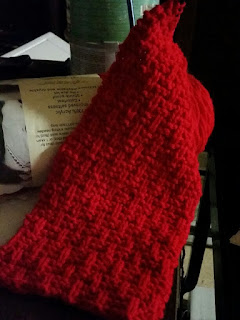 Tonight was Milo's test at Taekwondo to earn his uniform and first belt. He was ready and the testing began. He did awesome! The best part was when he struggled with one of the sparring moves he kept at it until he got it, no tantrum, or giving up. He was able to get all the way through the testing and he (and we) couldn't be prouder. This is EXACTLY why he needs Taekwondo - to continue to learn self confidence and to never give up. 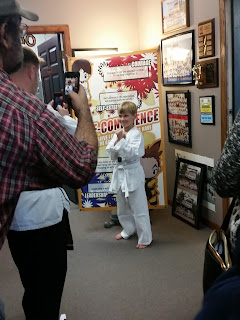 Saturday was our youngest daughters Birthday. How can she be 34 already? So, yesterday we went in to Ang and Fam's and in lieu of the normal "Birthday Cake" I made Caramel rolls from scratch. I haven't made them in quite some time but, luckily, they turned out well and she was happy to see them. Then we went to a local pizza shop and had deep dish pizza and drove around looking at Halloween decorations. It might have been too early, not too many places were very decorated. The ones that were looked awesome. I joked that it would be fun to live in town just through the Halloween, Thanksgiving, and Christmas holidays to decorate. Not too many would see it in our neck of the woods.

“I'm so glad I live in a world where there are Octobers.”
― L.M. Montgomery, Anne of Green Gables

We really didn't end up doing a "Fall Color" tour this year. The show from the backyard was enough for us. We don't have any maples but I get to see them every time I go to town.

Yesterday was leaf cleanup in the back yard. The big oak that litters the patio and packs the gutters on the north side of the house had lost most of it's leaves.

Notice the pole - leftover from the former owners of the property. We're pretty sure it's a "meat pole" and we don't use it for that but it's handy to hang hummingbird feeders, etc., from in the summertime. 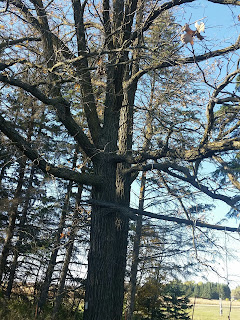 Then there's always the one that just waits until the last minute. Hopefully it will let them go so we can clean up before the snow flies. Many years it has to wait until the next spring. 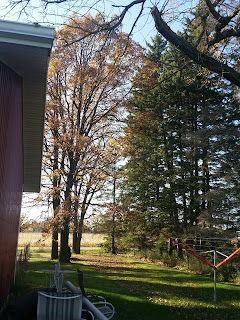 The rock garden has a nice blanket for winter. Everything should survive nicely. 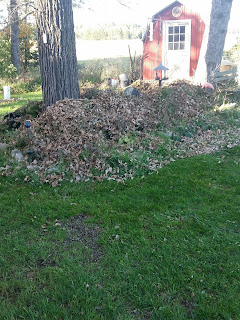 Life in the fast lane

We have been watching for the past week ago as the locators have been busy marking the utilities out here on the Sprucehaven.

Today the crew is here to do the directional boring under the roadway to OUR HOUSE! I'm sure we're prematurely excited but after being in the slow line of the information highway since it's inception we are BEYOND excited so stay tuned... 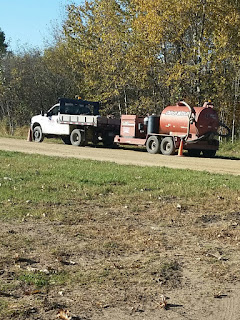 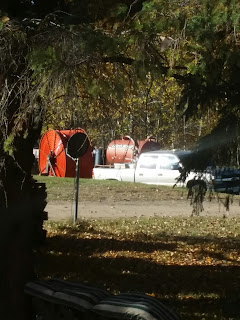 Since we're winding down the year we are checking things off the list. One thing that didn't make the list but quickly rose to the top was the water softener going belly up. Not only did it quit working properly, when putting it into bypass mode water starting spraying everywhere. Well, got that stopped to a steady drip (much more manageable). Then it was keep an eye on the bucket until we could get another softener. Sounds simple enough, as many things do in theory. But then since we were shutting the water down to replace the softener it seemed like (and was) a good time to switch the pump and re-do the entire plumbing area. So, 2 days later it was finished and today the new softener was fired up. It's digital, much fancier than the old one so we went through the setup and then just watched it, making sure there were no leaks and that it operated properly (as if we'd know).

I'm glad it's over and mostly glad we have water again.

I stopped in and watched Milo's Taekwondo class this week. He seems to be much more attentive and "into it" this go around. I'm so happy for him, his Mom tells me he is even practicing at home in the back yard (Yes!).

We were thinking the asian beetles weren't too bad this year - until today. Holy smokes, it was a literal SWARM of them out there today. It was a beautiful day too so we wanted to be outside. I was wishing it would start snowing just to get rid of them.

We had visitors  a couple days ago again. I thought they were probably long gone. 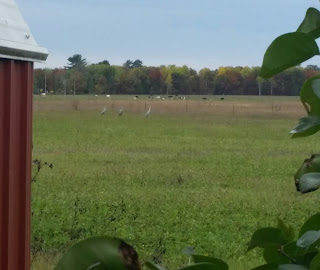 Another surprise visitor was this bunch of violets or Johnny jump ups as we call them. 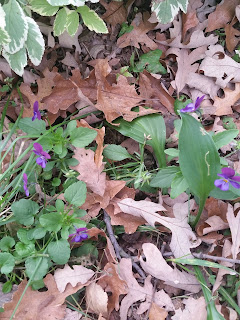 Tomorrow Ang and Fam are coming out to celebrate Dad's BD. She's making one of his favorite meals, Stuffed Shells, and I would bet his favorite Chocolate Cake. I'll make him another favorite on his actual Birthday on Monday.

“We learn much by tribulation, and by adversity our hearts are made better.”
― David McCullough, The Wright Brothers

It's rainy and windy out today. Yesterday was nice so we got a ton of outside stuff taken care of before winter. One of those things was covering the wood piles - good timing as it turns out.

I was in the mood for some comfort food since I wasn't feeling "up to par" today. I don't know what it is, seems to be sinus related. I always tackle something on days I don't feel well. I think it goes back to the days of raising the girls when getting sick and doing nothing just wasn't an option. So, today I decided I wanted to make hamburger gravy over mashed potatoes. I would normally use cream of mushroom soup but I didn't have any so I decided to make it from scratch. I know how to make a roux and I used beef broth for the liquid. I used to have trouble remembering how much of what I needed so I came up with what works for me. 1/4 - 1/4 - quart. 1/4 lb butter 1/4 c. flour and a quart of liquid.

I threw one of those gorgeous carnival squash in the oven with a little butter and brown sugar, roasted the seeds just like pumpkin seeds. Used sour cream in the potatoes instead of milk. It was perfect! 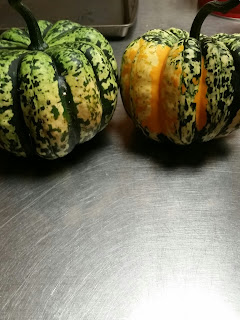 Angie got me a really useful kitchen tool that works wonderfully for mushrooms. I'm sure it works equally well for other things but, so far, that's all I've used it for. 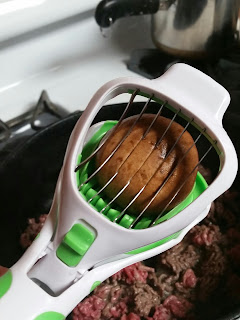 We had a visitor early in the week. I tried to take a picture with my phone through the glass door. I had to zoom so it's not a great picture but you can see him but maybe not identify him. It was a hawk, not sure what kind but saw it fly in. 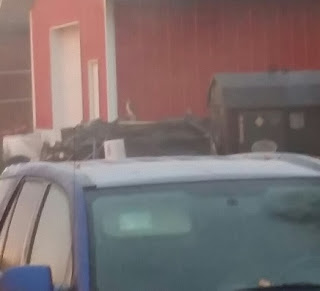 We took an impromptu drive earlier in the week fearing the weather would turn and we wouldn't get to do our annual "fall color tour" so we loaded up Coop and took off. Well....the colors were few and far between and I didn't even capture one picture. One thing was right though, with this rain and wind the leaves are coming down pretty steadily at home here.

Picture of the week:

P.S. We won (we would have tied but the "guys" decided to risk it)